Prior to joining the Union on September 9, 1850, California was governed at different times by both Spain and Mexico. Today, remains of the Spanish influence can still be seen in the historic Old Mission Dam site at the west entrance of the City. Established in 1779 under the direction of Father Junipero Serra, and built by the Kumeyaay Indians, the dam provided water to the land of Mission de Alcala.

The Spanish parceled this region into land grants and divided the grants among Spanish soldiers in payment for services rendered. Years later, the land was sold to American settlers. George A. Cowles (Kohls), a founding father, was one of the local buyers. Cowles bought 4,000 acres in 1877 to develop his vineyards. He also introduced a number of tree species to this area, such as pomegranate and magnolia trees.

Known as Cowleston, the town was linked to the Cuyamaca Railroad at Cowles Station. A landmark that bears this pioneer's name is Cowles Mountain, at the southwest end of the Santee Valley.

In 1893, the community followed her lead and changed the town's name to Santee. The school and the school district also adopted the new town name.

Hosmer P. McKoon came to the Santee area in 1885 and purchased 9,543 acres, which he called Fanita Ranch in honor of his wife Fannie. Over the ensuing years, segments of the ranch were sold to new arrivals.

In 1898, the Scripps family of newspaper fame took possession of Fanita Ranch, a 7,000 acre parcel. It was used to raise cattle and as a country resort by the Scripps family. During World War II, 2,300 acres of the ranch, west of present Santee, were acquired by the federal government and used as a military training ground. In 1958, another 4,300 acres were purchased by a development firm, the Carlton Company (later Santee - Carlton Company). Its early president was Bill Mast, after whom Mast Boulevard is now named. During the ensuing 22 years, the area's population expanded from less than 2,000 residents in 1950 to 25,750 in 1970. With this phenomenal rate of growth, the residents became increasingly concerned about the character of the community, particularly as it related to new development.

Subsequently, residents of Santee expressed interest in the community through the San Diego County Santee Citizen's Planning Committee. This group of volunteer citizens, established and officially recognized by the San Diego County Board of Supervisors in December of 1968, served as a local land-use-and-planning advisory board to the county planning commission and the Board of Supervisors. Though the size of the committee was not fixed and subsequently fluctuated, 29 people originally served on the Executive Committee and another 129 members made up the entire planning committee.

This core of community activists spent thousands of hours, giving up precious free time, preparing the Santee Community Plan. The sacrifice, however, bore fruit when the plan secured approval from the San Diego County Board of Supervisors in 1974. Following the City's birth, the plan acted as the community's General Plan until the current Santee General Plan was adopted in 1984.

1976 proved to be a sad time for incorporation supporters who watched in dismay as their initiative for cityhood was voted down by a 2-1 ratio. In 1980, however, residents reversed themselves and voted for incorporation, giving rise to the City of Santee. In the same election, the electorate chose its first five-member City Council. Prior to the direct election of a Mayor in 1984, Council Members selected from among themselves a Mayor and Vice Mayor for terms of two years. Terms were reduced to one year in 1982, although the Mayor's was increased to four following the passage of the direct-election initiative of 1984, giving residents exclusive power to seat the Mayor.

The City has continued to grow and mature since its incorporation in 1980. No longer just a bedroom community of homes, Santee now boasts major commercial centers in its downtown, a business community which employs over 17,000 people, and significant recreational opportunities.  Santee takes pride in its past and looks forward to its future! 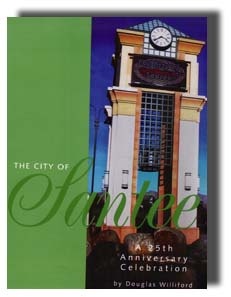 The City of Santee’s evolution from being a small, backcountry village in the late nineteenth century to becoming a diverse and multifaceted modern city is a fascinating and colorful story. From the community’s original founders, George and Jennie Cowles, Hosmer McKoon, and Milton Santee himself, to those who led the incorporation drive toward it becoming a city almost a century later, Santee’s history is filled with people who shared a vision of this community becoming something truly special.

The City of Santee is proud to announce the publication of The City of Santee, a 25th Anniversary Celebration. This beautiful 8-1/2 x 11 hardcover volume will describe and illustrate, with approximately 140 historic and contemporary photographs, how the character of the city has been shaped through the years. Don’t miss this opportunity to visit the Santee of yesterday and today through the 96 pages of intriguing and exciting text!

Order your copy today at the price of $25.00. Your book can be shipped directly to you at an additional cost of $5.00 per book or to save on shipping and handling charges, pick your book up at the City of Santee Community Services Department, 10601 Magnolia Avenue, Building 6.

Don’t miss your opportunity to order your limited-edition copy today!